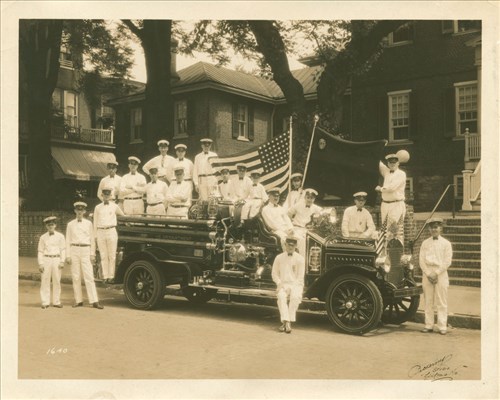 About the end of 1894 the business men of Berlin purchased a hand pumper and some hose and made plans to construct a wooden tank as a water supply. A loose and informal organization automatically sprang into existence. All who had contributed met to discuss its use and anything pertaining to it… so when on a Sunday night in August of 1895, a fire started in a hayloft on Gay St., directly behind the Atlantic Hotel, some of these men went onto action with their acquired pumper. They pulled it to an open well and for a short time fought the fire. However, the well went dry—their water supply now gone, the pumper was abandoned and burned along with most of Berlin's business section.

From 1895 until the time that the first water mains were laid, the town was served by a bucket brigade. There was no organization, you simply grabbed a bucket and started water on either your, or your neighbor's house.

In 1901 another major fire stuck the downtown area, and again on October 1, 1904. These fires were fought with will, determination, and buckets.

From this meeting, the Berlin Fire company was born. The first equipment the company had were 2 hand pulled hose carts which were built by Theodore Wimbrow.

The first major fire was on November 2, 1912 at the Berlin Milling Co. the fireman were delayed in responding the alarm due to bad street conditions, and after reaching the scene, they were handicapped by the lack of water, which were the main factors which caused the total destruction of the mill.

1912 saw the purchase of the first motorized piece of equipment, a used Oldsmobile Autocrat, purchased from a dealer in Philadelphia. The truck was kept at Murphy's Garage until the company moved in new quarters in June 1916.

In 1922 Pocomoke fell victim to a serious fire of their own, and requested assistance from numerous neighboring

In July of 1924, the fire company purchased a Mack chain drive fire truck from Mack fire truck of New York. The truck was paid for from proceeds of three carnivals the third held in 1927. The first real work it did was at the Ocean city fire of 1925 which destroyed the Pier and Congress Hall among other places. The truck pumped water for 11 hours nonstop. The fire company still owns this truck; it has been refurbished, and is referred to as the Old Mack.

In July 1925, the Berlin Fireman's Band was organized under the supervision Mr. Frank Sacca. All members who were not active members of the fire company were named as honorary members. For a number of years the band played in numerous parades and concerts in the area.

In 1964, the fire company took on the challenge of providing ambulance service to the Berlin area after Mrs. Anna Burbage announced that she was quitting the ambulance business. Quickly, using the same fortitude as our founders, the fire company raised the money and purchased a 1964 Cadillac ambulance for $18,000.

By 1972 the amount of calls required the hiring of a full time person. One of our own, Clayton Collins "Mr. Clayty" was hired and worked for us until his retirement in 1984.

In 1967 the fire company built the building which serves as our headquarters today. In 1990 we expanded by building our Station 2 which is located on Rt. 611 and houses a pumper in order to quicken our response time to the Sinepuxent, South Point, and Snug Harbor area. In order to accommodate our growth, in 1992, an addition was built onto our headquarters building.

In 2008, the fire company started renting a building just off of Rt. 50 east of Stephen Decatur High School. This building houses a pumper and ladder truck. The fire company has purchased property east of this location in July 2010 to build a fire house in order to continue to protect that area of our fire district.

Today the fire company has 3 ambulances along with other equipment including a 75' ladder truck and a 100' ladder platform, 4500 gallon tanker and heavy rescue truck. All of these vehicles cost hundreds of thousands of dollars each. Out of necessity we are growing and adding to our fleet. Each year every volunteer participates in hundreds of hours of drilling and training.

The fire company consists of approximately 55 active members and 5 cadets. On staff we employ 8 full time paramedics and 4 EMT-B/Firefighters and numerous part-time personnel.  This allows us to have two paramedics and one EMT on duty each day and a second EMT during the dayitme hours.

Our ambulances run over 1200 calls each year. We respond to over 300 fire calls for service annually.

Through the years, we have been fortunate to have many very dedicated members. Of those, 3 stand out, #5 Mr. Charles "Mose" Parker, #23 Mr. Frank Timmons, #3 Mr. Clayton Collins. These 3 men each served their community through the fire company for over 50 years. Mose and Mr. Frank have passed on, in their honor their numbers have been retired. Mr. Clayty served over 65 years as a Berlin Fireman. #3, his number, will never be assigned again, it is his forever.

Unfortunately, during the 100 years we have been in existence, we have suffered the loss of one person killed in the line of duty. Mr. Franklin L. Pennewell joined the Berlin Fire Company on June 4, 1930. After a six month probationary period, he was made an active member in January of 1931. In December of 1933, Mr. Pennewell was elected Vice-President. On the evening of Saturday, February 10, 1934, the Berlin Fire Company was alerted to a house fire at Medford Wilkinson's farmhouse which was located in Taylorville. Berlin Chemical fire Truck #2 was the first unit to respond. On board were, Raymond Rogers, driver, Noble T. Morgan, Chief, Clifford Davis, Russell Rogers, William Davis, Wallace Timmons, Charles Lynch, William Hudson, Elmer Warren, Franklin Pennewell, Olan Dennis, Olan Shockley, Tony Villani, and William Thomason. As the truck was crossing an ice covered wooden bridge by the Turville Creek Mill, it started to skid. After skidding about 100', it struck a culvert and overturned. The sudden impact hurled 12 of the men over the side of the bridge through some trees and onto the ice covered creek. The truck also skidded down onto the ice barely missing the helpless fireman below. The ice gave way and they sank into the shallow water. Several were badly injured and were pulled to safety buy their companions. The pond's shallow water probably prevented a major catastrophe. Franklin Pennewell, Olan Dennis, Olan Shockley, Tony Villaini, and William Thomason were all seriously injured with head and facial injuries. Franklin Pennewell and Olan Dennis being the most serious. Mr. Pennewell and Mr. Dennis were taken directly from the scene by car back to Berlin and subsequently to Peninsula General Hospital in Salisbury. Once there it was determined that Mr. Pennewell was suffering from a fractured skull. By late Sunday, pneumonia set in. On Monday morning February 12, 1934, Berlin Fire Company Vice-President Franklin L. Pennewell died as a result of the fractured skull he had received.

Mr. Pennewell had been a distributor for the Sinclair Oil Company and was survived by his wife Maggie, a son Ralph, two sisters, Mrs. Elizabeth Harper, and Mrs. Mildred Williams, and a brother Robert Pennewell, all of Berlin.

Tormented by what had happened, the driver of the fire truck, Raymond Rogers, returned to the fire house that night and advised Chief Morgan that he would never be able to be a fireman again and resigned.

I am sure that sometime during the funeral and the days that followed, someone said that Mr. Pennewell may be gone but will never be forgotten. After all, that is a statement that today is said as a way to indicate that one's sacrifice is appreciated, and I'm sure it was no different back then I take great pride in being a member of the Berlin Fire Company. For many reasons, one of this is that their word is their bond. And on February 16, 1935 we kept our word. Starting that day and every February since, we gather at the Stevenson Methodist Church, Mr. Pennewell's church, and honor him.

The Berlin Fire Company much like the community we serve, is a work in progress. We strive to serve the best that we can. As our lives get more and more busy, it is harder to find people in the community who are willing to sacrifice the time from their families to become part of the fire company. But, for those that do, the rewards and satisfaction you get is well worth it. 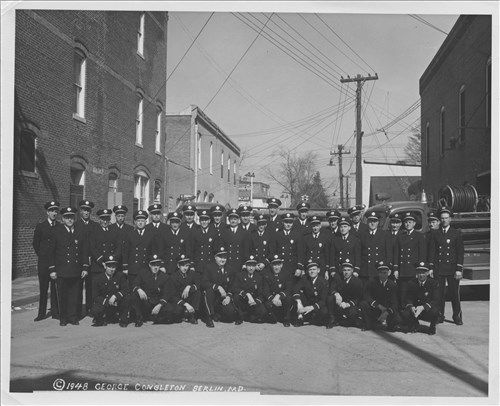 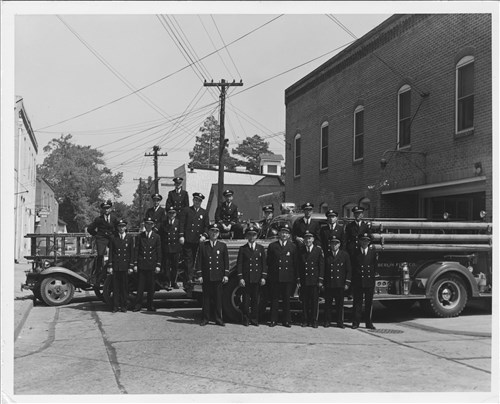 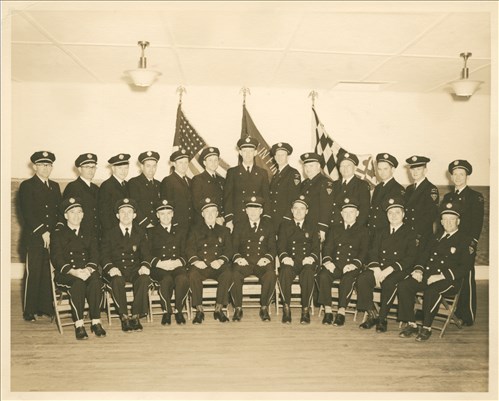 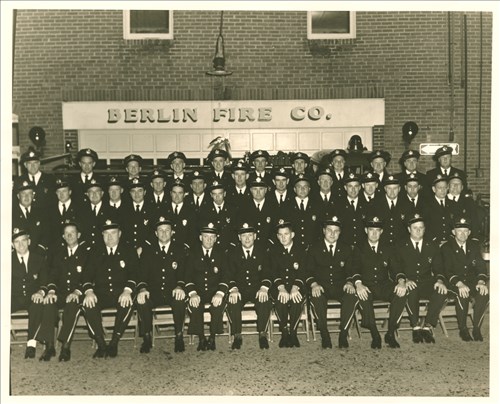 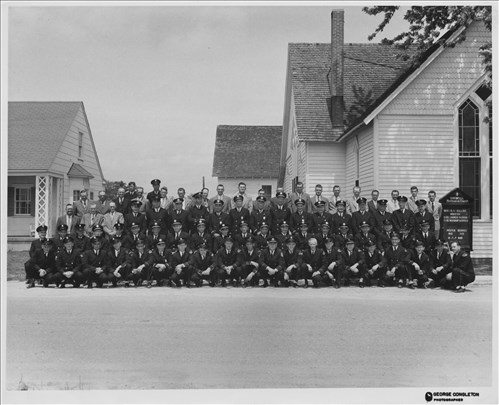 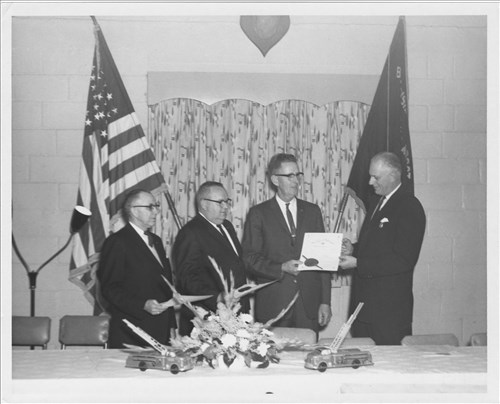 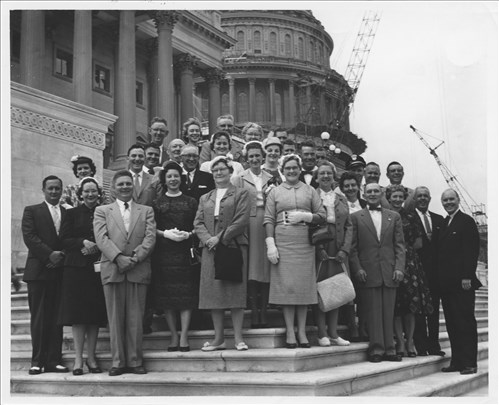