Berlin Fire Company members attended Stephenson United Methodist Church to honor Franklin L. Pennewell who it the only member of the Berlin Fire Company to die in the line of duty. During the 104 years we have been in existence, we have suffered the loss of one person killed in the line of duty. Mr. Franklin L. Pennewell joined the Berlin Fire Company on June 4, 1930. After a six month probationary period, he was made an active member in January of 1931. In December of 1933, Mr. Pennewell was elected Vice-President. On the evening of Saturday, February 10, 1934, the Berlin Fire Company was alerted to a house fire at Medford Wilkinson's farmhouse which was located in Taylorville. Berlin Chemical fire Truck #2 was the first unit to respond. On board were, Raymond Rogers, driver, Noble T. Morgan, Chief, Clifford Davis, Russell Rogers, William Davis, Wallace Timmons, Charles Lynch, William Hudson, Elmer Warren, Franklin Pennewell, Olan Dennis, Olan Shockley, Tony Villani, and William Thomason. As the truck was crossing an ice covered wooden bridge by the Turville Creek Mill, it started to skid. After skidding about 100', it struck a culvert and overturned. The sudden impact hurled 12 of the men over the side of the bridge through some trees and onto the ice covered creek. The truck also skidded down onto the ice barely missing the helpless fireman below. The ice gave way and they sank into the shallow water. Several were badly injured and were pulled to safety buy their companions. The pond's shallow water probably prevented a major catastrophe. Franklin Pennewell, Olan Dennis, Olan Shockley, Tony Villaini, and William Thomason were all seriously injured with head and facial injuries. Franklin Pennewell and Olan Dennis being the most serious. Mr. Pennewell and Mr. Dennis were taken directly from the scene by car back to Berlin and subsequently to Peninsula General Hospital in Salisbury. Once there it was determined that Mr. Pennewell was suffering from a fractured skull. By late Sunday, pneumonia set in. On Monday morning February 12, 1934, Berlin Fire Company Vice-President Franklin L. Pennewell died as a result of the fractured skull he had received. Ironically, on the night of the accident another unit responding to the fire had to pass the scene of the accident leaving their comrades behind and continue on only to find that the fire had already been extinguished by several people who had formed a bucket brigade. Mr. Pennewell had been a distributor for the Sinclair Oil Company and was survived by his wife Maggie, a son Ralph, two sisters, Mrs. Elizabeth Harper, and Mrs. Mildred Williams, and a brother Robert Pennewell, all of Berlin. Tormented by what had happened, the driver of the fire truck, Raymond Rogers, returned to the fire house that night and advised Chief Morgan that he would never be able to be a fireman again and resigned. I am sure that sometime during the funeral and the days that followed, someone said that Mr. Pennewell may be gone but will never be forgotten. After all, that is a statement that today is said as a way to indicate that one's sacrifice is appreciated, and I'm sure it was no different back then I take great pride in being a member of the Berlin Fire Company. For many reasons, one of this is that their word is their bond. And on February 16, 1935 we kept our word. Starting that day and every February since, we gather at the Stevenson Methodist Church, Mr. Pennewell's church, and honor him. 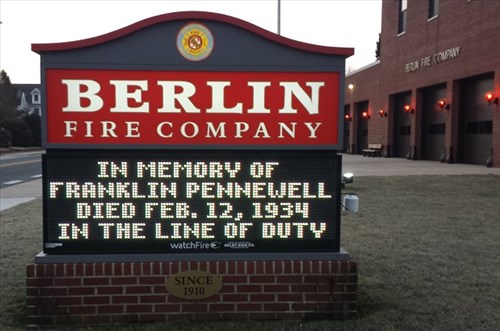 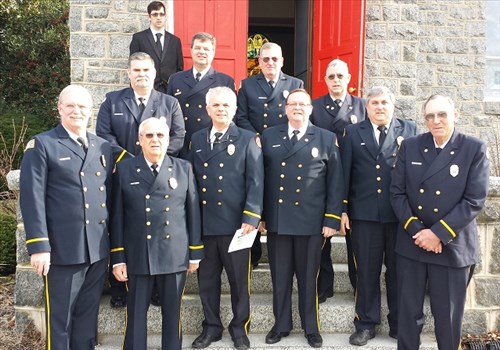